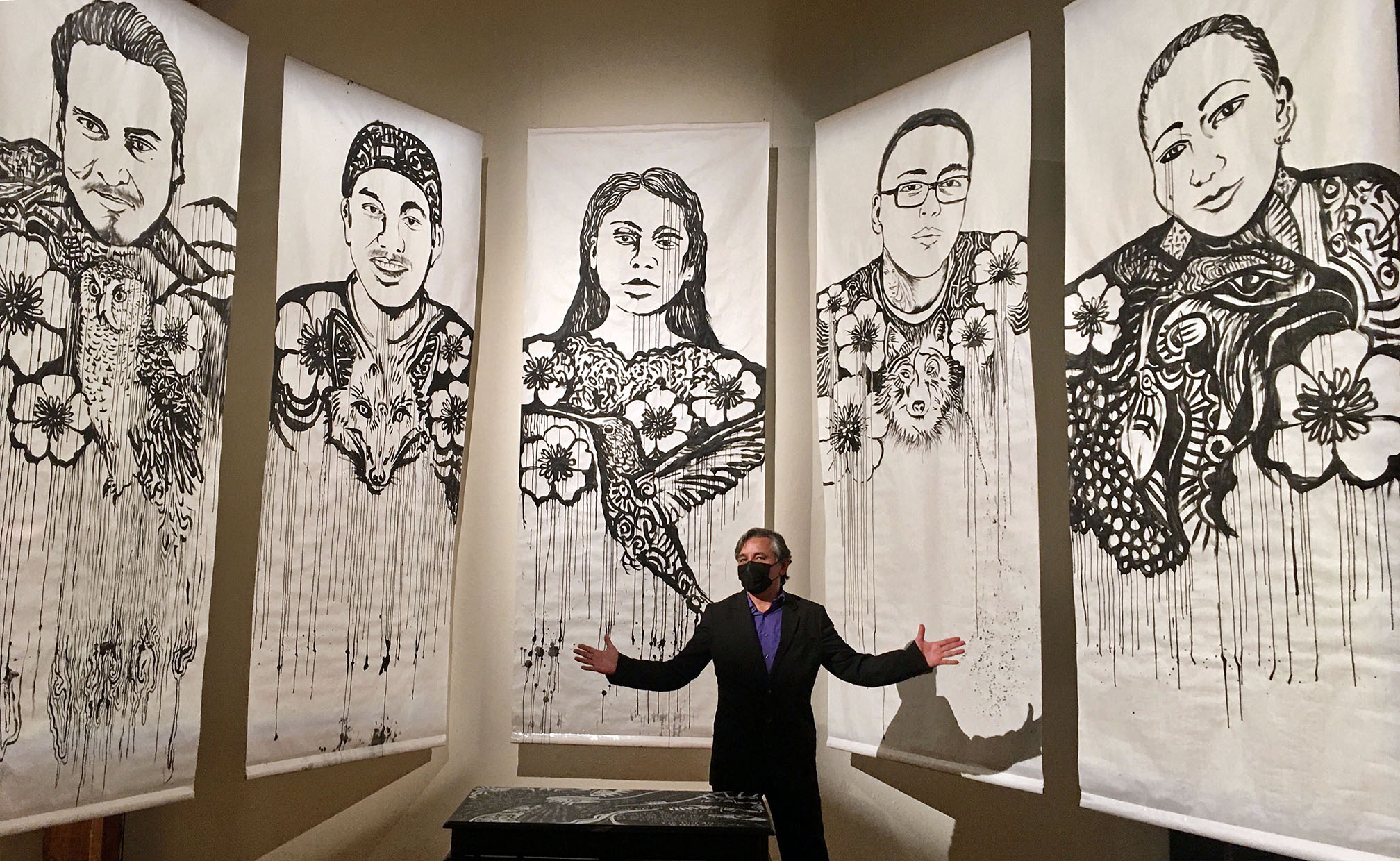 Arias is one of the founders and creators of MAPP (Mission Arts Performance Project) and creator of festivals in the San Francisco Bay Area such as: VideoFest, Luna Negra, and ILLUSION shows.

Adrian uses his dreams as creative initiatives, which he makes come true in performances and community projects, such as his multimedia shows called DREAMS, or most recently his Tarot in Pandemic & Revolution, where 24 visual artists and 43 poets from the SF Bay Area have participated.

“Adrian Arias, continuously evolves images, colors, and feelings framed by the urge of creation itself. An inventive visual artist, of infinite forms and mediums.”

-Nina Serrano, poet and activist at KPFA Radio in Berkeley.

“Adrian Arias, the ever brilliantly inventive visual poet of the gesturing Word,”

Adrian has been commissioned to do two murals in the Bay Area, one at Google’s new Mountain View facility and another at the San Francisco tenderloin, sponsored by the Luggage Store Gallery and the Someland Foundation.

In collaboration with La Tania Baile Flamenco, has received a grant from the Kenneth Rainin Foundation to create a Multidisciplinary visual and dance piece in 2023.

December 2021 – January 2022: Mural “River to the Sky” honoring the memory of the Black Hawk Jazz Club on the corner of Turk and Hyde in San Francisco, with images of Miles Davies and Billie Holiday, and also honoring the Ohlone territory where this mural currently stands, and its underground waters.

October: Day of the Dead at Somarts. Commission to create a big scale altar-ofrenda dedicated to 5 latinx killed by police brutality.

Day of the Dead at Mission Cultural Center. Commission to create altars-ofrendas for Yolanda Lopez, Jack Hirschman and Anna Halprin. Also a special collaboration with local artists cece Carpio, to create an altar dedicated to legendary local visual artist Hung Liu, at the lobby of the MCCLA.

Adrian was selected and commissioned, along with 12 other Bay Area artists, to create murals in the new Google Bay View new complex facilities.

December: Manos del Mundo/Hands of the World, open online call where I received 114 drawings of painted hands from around the world and after being digitized and enlarged on a large scale and display at the exterior windows of the MCCLA, SF.

September: Commission to paint the exterior windows of the MachinaLoci space in Berkeley, CA

August: Selected from a group of 16 artists to paint BLACK LIVES MATTER on the asphalt in front of the Regional Library in Petaluma, CA.

Commissioned to paint a mural in SF Chinatown, by Project Activism, SF.

May – December: Tarot in Pandemic & Revolution. Tarot in Pandemic and Revolution with a multi-cultural and multi-generational group of  24 visual artists and 43 poets from the S.F. Bay Area to participate in creating this deck.  It will be published in fall 2021.

April – July: “Amulets” was an original idea to be created live at the Albany Bulb, but it became an online idea and visual artists and musicians from the Bay Area were commissioned to make them.

“We Belong,” collective art show of Latinx from the San Francisco Bay Area.

2010: Artist-in-Residence, Kimball Gallery, de Young Museum, San Francisco. Developing his project “Beautiful Trash”, art and consciousness about the amount of plastic we consume every day, creating awareness about the “Garbage Patch” in the North Pacific Ocean.

Between the years 1980-2000, Adrian was part of the duo Arias & Aragon in Lima, and are considered pioneers of Video Art and Multimedia shows in Peru, his country of origin.

He is part of the Anna Halprin Performing Lab. under the direction of Anna Halprin and creating scores regularly with the group since 2013.

Between 2015-2019, Adrian created a series of collaborative and personal performances based on his dreams. Here a video link for the first one, Dream #0: https://vimeo.com/224787915

2009: Video-poem “Frida in the Mirror” selected @ 52nd SF International Film Festival and winner “Best of the Festival” at the Berkeley Film & Video Festival.

His poem “Vitis Vinifera” won the Best poem at the Struga Poetry Evenings in Macedonia, 2009.

His new poetry book “Dictionary of confessions” will be published at the end of 2021 by Peisa publishing house in Peru.